Boveta Nutrition’s mission is to enable livestock operations to operate more efficiently and profitability while minimizing feed waste and reducing the environmental footprint of meat and milk production. The commercial dairy study summarized in this report confirms that Boveta’s patent-pending formulation approach can be used to optimize diets and improve performance and the feed efficiency of dairy cattle in a commercial dairy setting.

This study was conducted on a privately owned dairy near Martin, MI. The day-to-day aspects of conducting the trial were overseen by the farm manager and the farm’s nutrition consultant. This experiment (42 days) was conducted from May 29, 2020 until July 10, 2020.

Animals: Holstein cows (n ≅ 450) were divided into two equal groups. Groups were balanced based upon parity, stage of lactation (DIM), mean milk production and milk components measured three weeks before the co-variant adjustment period. The number of cows less than 80 DIM were equal between groups. Cows were housed in a free stall facility and fed two separate rations. Cows were milked 3X per day in a 2 x 34 parlor and daily milk yields were recorded by treatment and individual cow milk yields were recorded weekly. The DHIA data collections on days -21, 0, 21 and 42 and the internal farm meters utilized on day 12 and day 32 of the test were used for statistical evaluation.

Diets and Treatments: A three-week, co-variant adjustment period was followed by a 42-day test. The day 0 DHIA test data was used as the covariate to equalize both groups on trial. The base ration contained corn silage, alfalfa haylage, corn gluten, liquid whey, canola meal, vitamins, and minerals. The base diet and the optimized diet were formulated to be as close to iso-caloric, iso-nitrogenous and similar in RDP (% of DM) as possible, to determine whether Boveta’s diet optimization approach could improve milk yield and/or components. Diets were formulated to contain a minimum of 16.0% CP and 6.6% RUP on a DM basis.

The primary sources of protein in the base diet were dry corn gluten feed and AminoPlus. The base diet was formulated to contain at least a 2.5:1 ratio of RUP-Lys:RUP-Met and a minimum of .30% RUP-Lys and .09% RUP-Met on a DM basis.

The treatments were administered as follows:

The amino acid profile of the optimized diet was adjusted by partially replacing dry gluten feed with AminoMax, a bypass canola meal manufactured by Afgritech, and by adding encapsulated lysine (AminoSure L from Balchem Corporation). A comparison of the diets using the Boveta model is presented in Table 1. The adjusted diet was formulated to maximize the potential biological and economic response to adjusted amino acid:ME ratios without attempting to optimize amino acid density or ratios to 100% of theoretical requirements. See Tables 2 and 3.

Rations were offered as a TMR once daily for ad libitum intake. Delivered diets were pushed up 8-10 times daily to encourage ad libitum DMI. The amount of feed offered was adjusted to allow for about five percent feed refusals. Feed refusals were measured daily, and the actual dry matter intake is presented in Table 4.

Animals and Performance: The number of animals in each group and pen milk production were reported daily to correlate with the pen mean for daily DMI. According to the breeding needs of the farm, animals were rotated in and out of the test groups weekly (~10-15 cows/group/week). Each week the new cows were allotted to match the animals leaving as closely as possible. The net effect of this on the test was very small as there was an addition of only 11 cows during the test period and removal of ~25 cows.

Feed Amounts: The TMR were mixed and delivered with a Kuhn-Knight, vertical Maxx VT 180 feed mixer. Feed DM was monitored daily and adjustments in amounts of feed offered made accordingly. Feed offered and estimated consumption (offered-refused) was recorded daily with the TMR Tracker program.

Milk Yield and Composition: Individual milk weights were recorded by pen at each milking for all animals. Milk samples were collected from two consecutive milkings on days -21, 0, 28 and 42. Milk protein, fat, lactose, somatic cell counts, and milk urea nitrogen were determined by DHIA Laboratory Services (DHIA Labs). See Tables 5 and 5a.

Data was analyzed using a repeated measure, completely randomized design. Yields of milk and milk components were co-variant adjusted using data collected in the Day 0 test period. The statistical model included DIM to account for the effects of lactation stage. Significance was declared at P<0.10 unless otherwise stated. See Table 6. 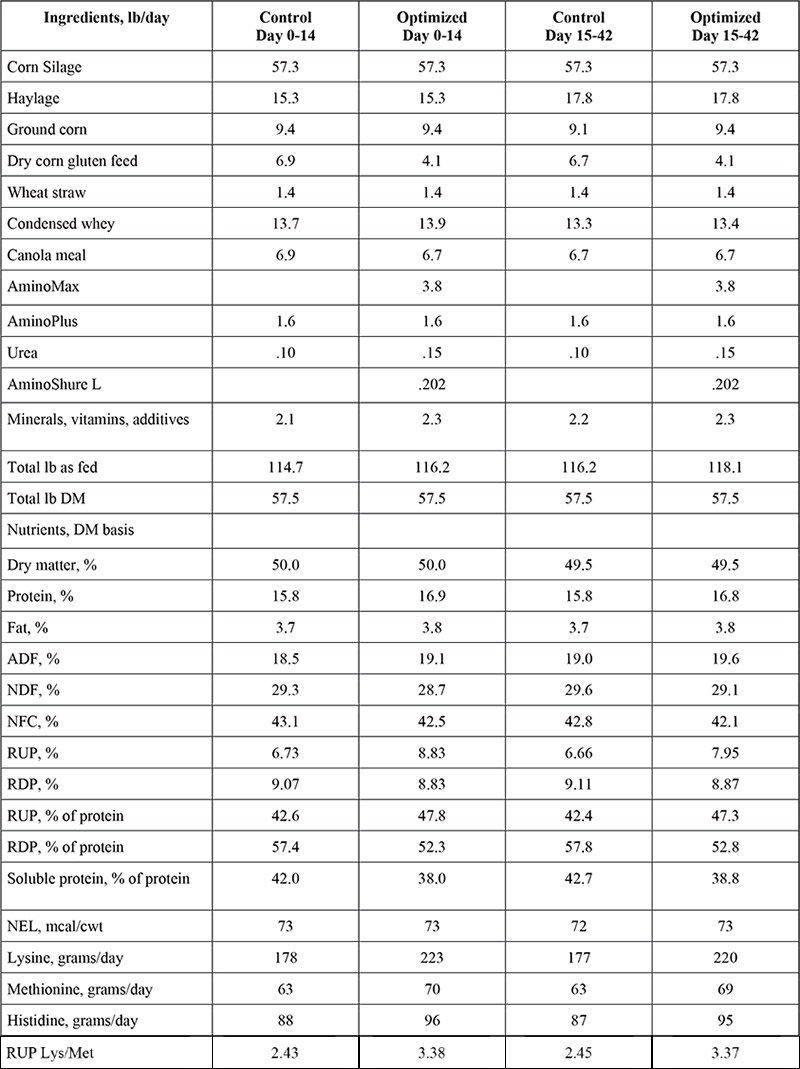 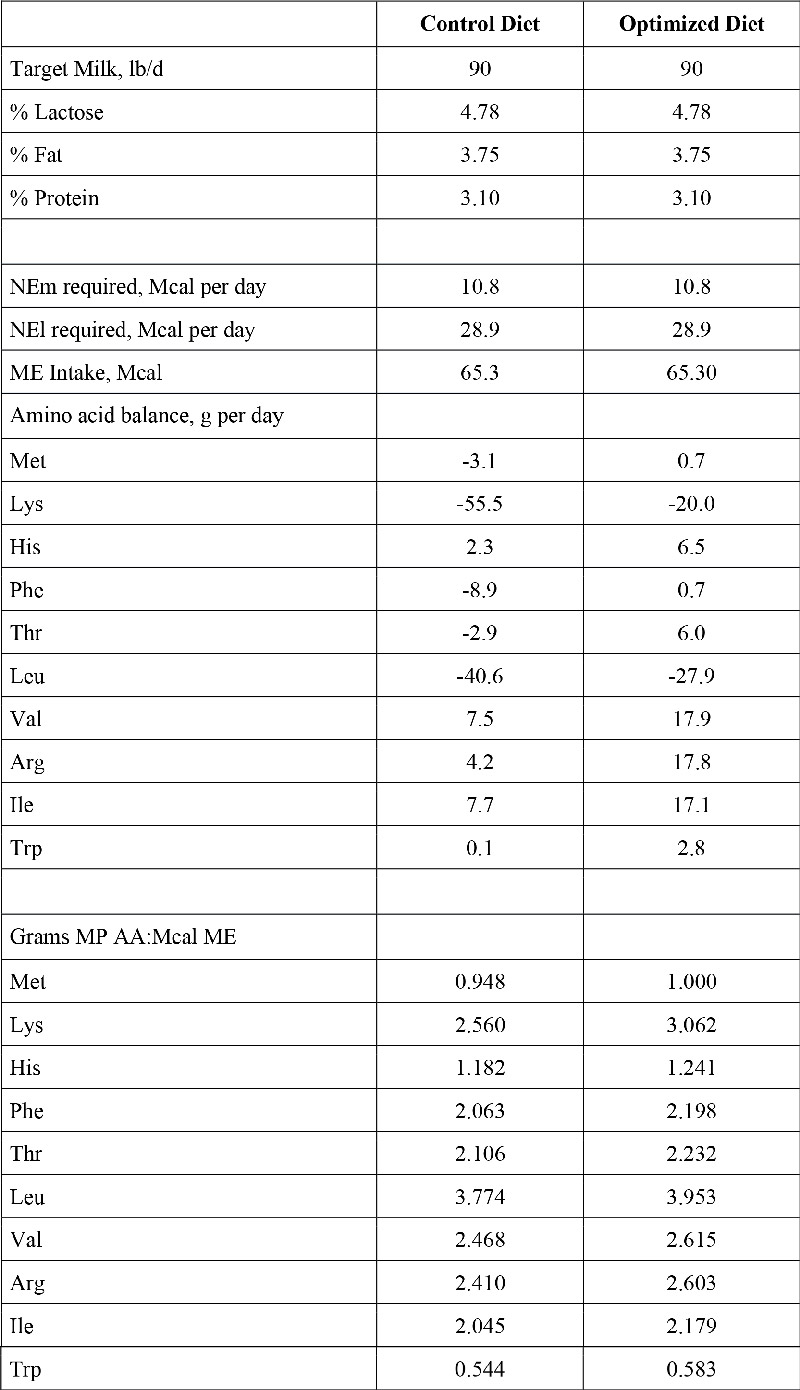 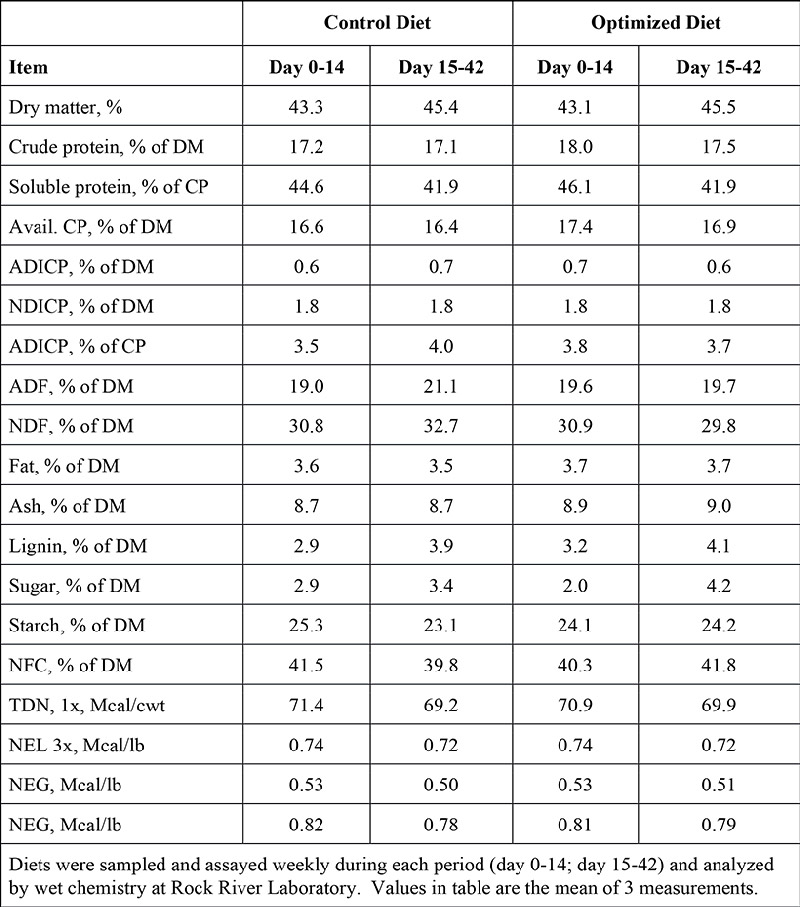 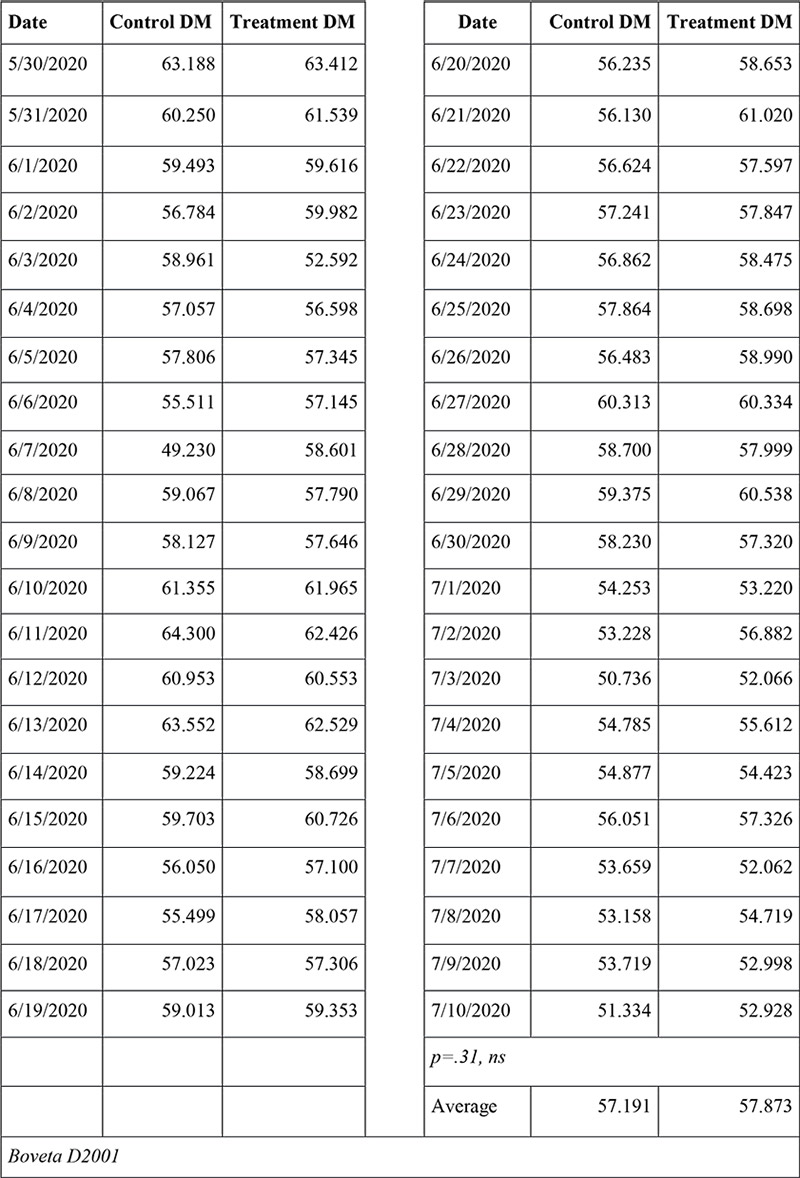 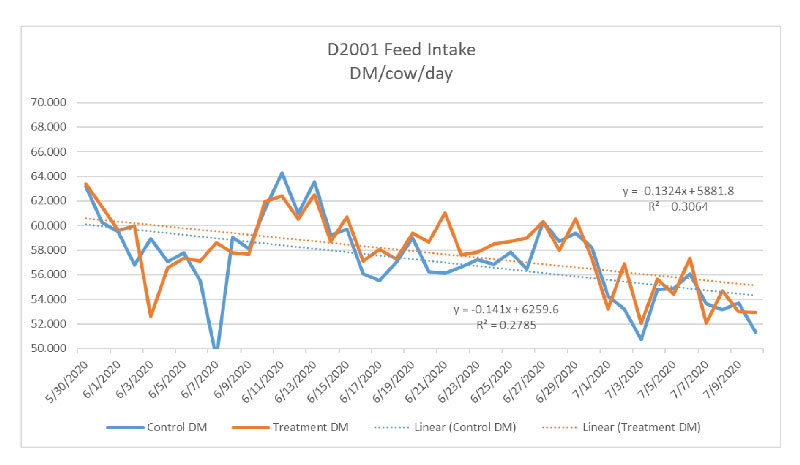 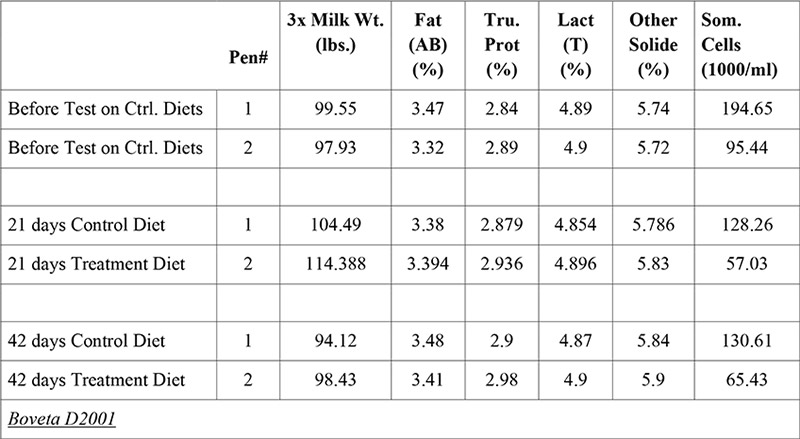 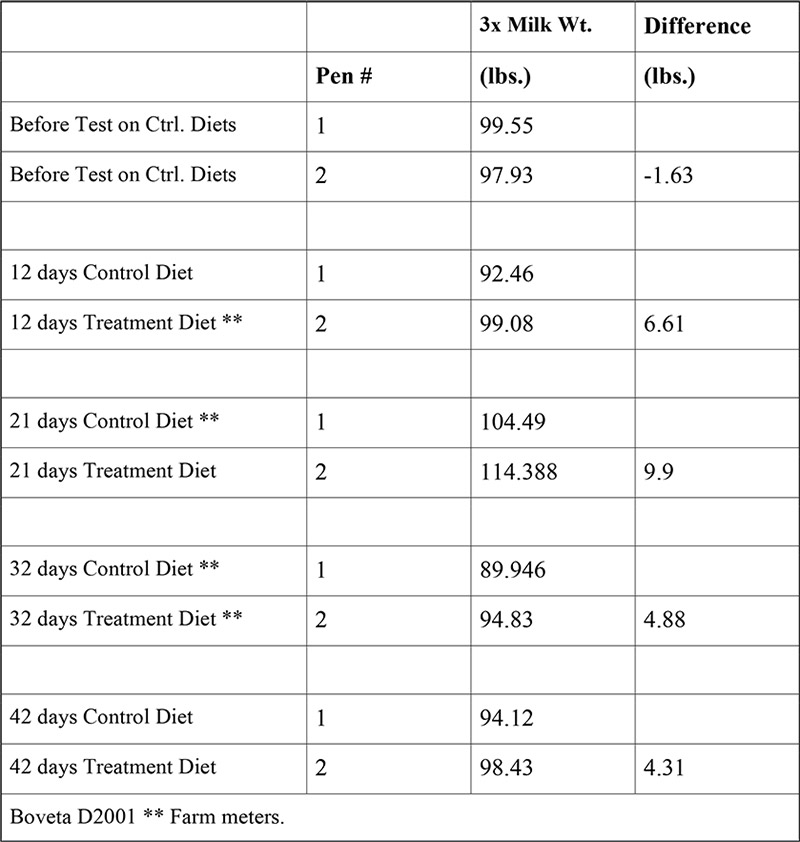 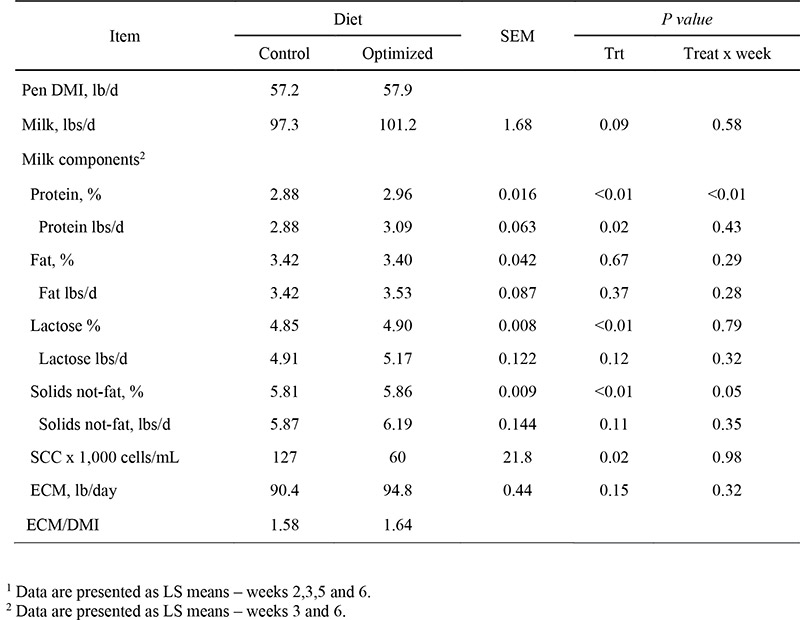 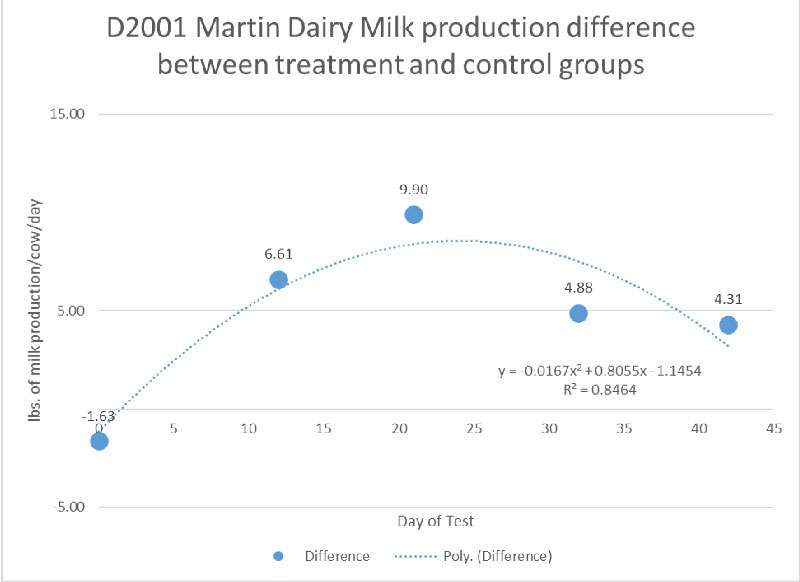 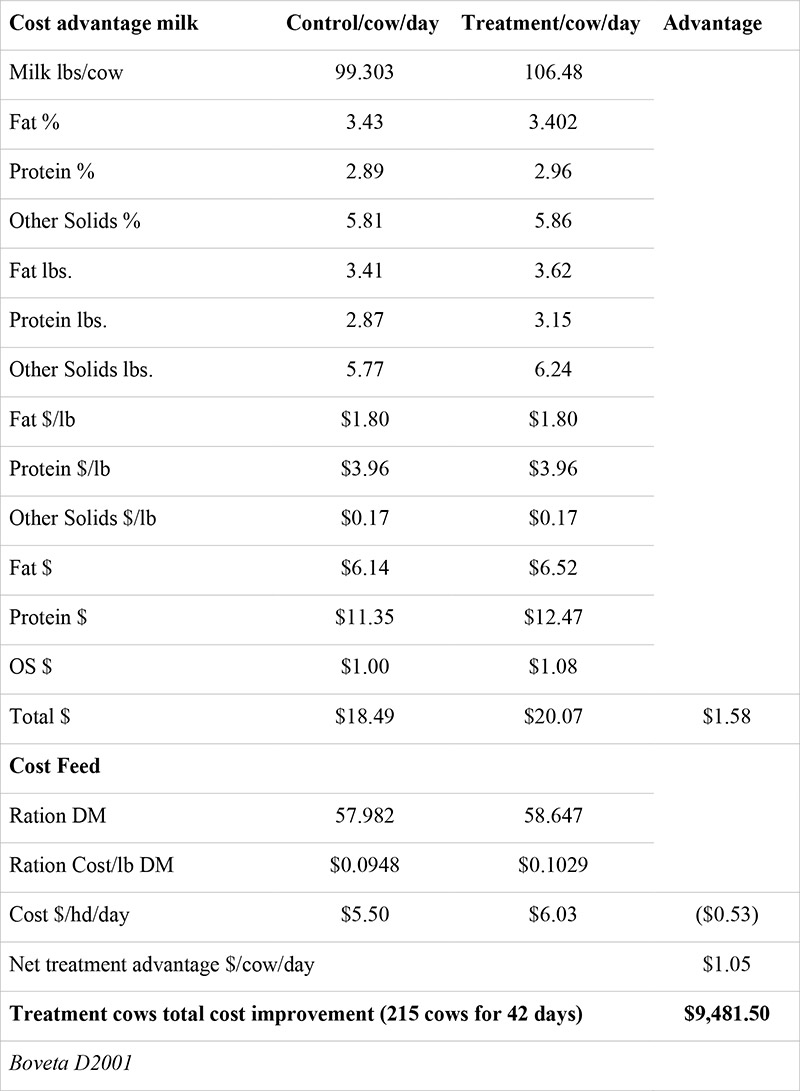